Niel Visser was born and raised in South Africa. From a young age he was passionate about sports, and excelled in rugby, track and field, tennis and surfing. His love of sports, and a sustained back injury, would introduce him to physical therapy and lead him to pursue it as a career. After two years in the military and a gap year in Europe, Niel enrolled at the University of Stellenbosch, graduating in 1994 with a Bachelor of Science in Physiotherapy. Seizing an opportunity to work and travel, Niel came to the USA in 1995, and worked in various settings across the country as a PRN therapist. He gained experience working in in-patient rehab facilities, acute/sub-acute care, nursing homes, home health, outpatient orthopedics, sports medicine and work hardening. In 1999 Niel took a position in Spartanburg and became the clinical area coordinator overseeing four outpatient facilities. He co-founded Advanced Therapy Solutions, Inc. in April of 2003 and, with his business partner, Dillen Hartley, has seen their business grow from one clinic and two staff members to 5 locations and 50 employees. Niel received the Butch Buchanan Award for Clinical Excellence from SCAPTA in 2007, in recognition of his contributions and outstanding performance in the practice of physical therapy. In 2014 Niel completed his Doctorate in Physical Therapy with emphasis on Executive Practice Management through Evidence In Motion. He and his team also received the Faculty Favorite Award in the Business Plan Competition. Niel has a special interest in treating spine patients pre- and post-operatively, as well as sports injuries. He enjoys staying up to date on the latest therapy related research. When he is not at work, Niel enjoys playing racquetball, hanging out with family and friends, and following his favorite sports teams. 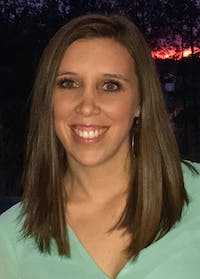 Kacey Scanlon joined the ATS team at the start of 2018. She holds an MS in Occupational Therapy after completing the joint undergraduate and graduate program at Ithaca College in upstate New York. After graduating, she relocated to upstate South Carolina to begin her career and has 3 years of experience in an inpatient rehabilitation and acute care setting. She has a special interest in stroke rehabilitation and holds a Neuro-IFRAH certification for treatment of stroke and brain injury. In her free time, Kacey enjoys volunteering for the Special Olympics and Camp Spearhead, spending time outdoors with her dog, and dancing. Devika is a Spartanburg native, graduating from Dorman High School and then Wofford College. She was set on being a physician until she worked as a receptionist at a local physical therapy clinic during school and fell in love with all things physical therapy. Devika started PT school at MUSC in Charleston just two days after graduating from Wofford in 2011. She received a Doctorate in Physical Therapy in 2014. After graduating, Devika worked in an outpatient pediatric setting, first in Savannah and then in Asheville. She moved back to her home town of Spartanburg and joined Advanced Therapy Solutions in August of 2018. Devika loves being an active part of the constantly growing Spartanburg community and supporting local businesses. In her free time, she likes cooking with family and friends, catching up on all the latest shows and being outside with her dog Lucy. Mareli Klopper qualified as a Physical Therapist from the University of Pretoria in South Africa in 1995. She spent the next few years of her career travelling and working in various settings and countries, including South Africa, the United Kingdom, Namibia and the USA. In 2009, Mareli returned to the USA and after working in an acute hospital setting in Louisiana for a year, she joined ATS in Spartanburg (2011) to continue working in outpatient Orthopaedic Physical Therapy, her preferred clinical environment. She completed her Doctorate in Physical Therapy through Evidence in Motion in 2013. Mareli is recognized as an Orthopaedic Clinical Specialist by the American Physical Therapy Association and is a Fellow of the American Academy of Orthopaedic Manual Physical Therapists. In her free time, she enjoys riding her dual-sport motorcycle in the Blue Ridge Mountains with her husband. Blake received her undergrad from the State University of New York in Cortland, NY, with a degree in Physical Education in 2005. After graduation she accepted a position as an aquatic director in the recreation department for the City of Myrtle Beach, SC. Blake held this position for 8 years before returning to school to pursue the advanced degree of Doctor of Physical Therapy from the University of St. Augustine in St. Augustine, FL. Blake graduated in 2015 and joined Advanced Therapy Solutions in 2016. She enjoys working in the outpatient environment and has a passion for aquatic therapy. Blake enjoys being active and spending time with her family. 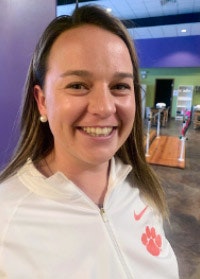 Allison received her B.S in Exercise Science in 2015 from Southern Wesleyan University. In 2017, she graduated from Greenville Technical College with her Physical Therapy Assistant degree. Allison stayed in the upstate, where she worked in the outpatient therapy setting for a year before traveling and working in an extensive acute care hospital in Louisiana. At the end of 2019, Allison relocated to Spartanburg, SC where she joined the ATS team, continuing her passion in the outpatient setting. In her free time, Allison gives private pitching lessons and coaches a travel softball team here in the upstate. Lena graduated from the University of Stellenbosch, South Africa, with a Bachelor of Arts degree, and earned a post-graduate diploma from AAA School of Advertising in Cape Town in 1994. She joined her husband, Niel, in the United States in 1995, and together they traveled extensively before settling down in Spartanburg. She worked in the public relations industry for several years before officially joining the ATS team in 2008. Lena manages Accounts Payable and Human Resources for the company. She loves spending time with her husband and two sons, listening to music, reading and traveling when time affords it. 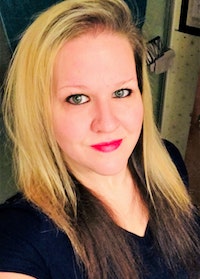 Becky Lowe joined ATS in December of 2016 as Intake Coordinator at the Spartanburg Westside facility. She graduated from Virginia College with an Associate’s Degree in Applied Science for Medical Office Administration. Becky was on the President’s List and inducted into the National Honors Society. She is also a member of the National Society of Leadership and Success. Becky is mom to two daughters, Jocelyn and Jasmine. In her free time she enjoys movies with her two princesses, and listening to music. 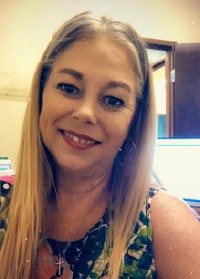 Karla joined ATS Westside location as the Billing Director in January 2020. Karla has an extensive background in medical billing with over 15 years’ experience in the field with concentration in revenue cycle management. She was born & raised in Spartanburg; her hobbies include taking walks with her two spoiled dogs Jax & Gracie and spending time with her family & friends. 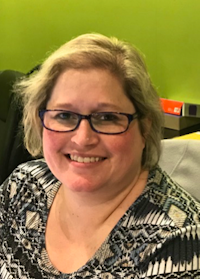 Kelly Cockrell joined ATS in October of 2016 as Billing Assistant at the Spartanburg Westside facility. She graduated September 2015, from Virginia College of Spartanburg with a Certificate in Medical Billing and Coding. Kelly was on the President’s list from August 2013 to September 2015. Her hobbies are reading and shopping. She hopes to one day travel to Europe, in the meantime she and her husband love to travel here in the U.S. She loves spending all her free time with her husband, daughter and of course her beloved dog, Odie.